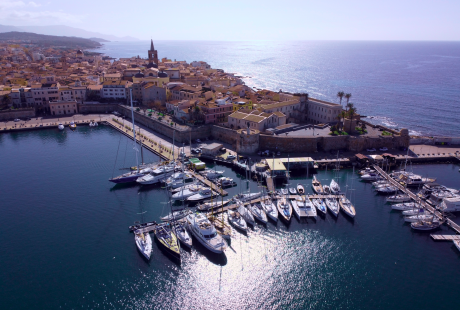 Alghero is a thriving city situated in north-western Sardinia, 30 kilometres from the provincial capital of Sassari. It is also close to the sea port at Porto Torres, and it enjoys excellent links with the main airports on the Italian mainland.

Indeed after Cagliari and Olbia, Alghero is the third-largest Sardinian airport.

Alghero is nicknamed Barceloneta (’Little Barcelona’) because the city retains a considerable proportion (22.4%) of speakers of Algherese, which is a Catalan dialect. Algherese is recognised by Sardinia Region and by the Italian State as a minority language in Italy.

Alghero is also famed as the Riviera del Corallo (’Coral Riviera’), because the bay is a favourite spot of coral fishers, who fish for red coral -one of the most prized species of coral to be found anywhere in the world.

Around Alghero: a wealth of beaches, caves and reefs, parks and mysterious archaeological sites

Alghero boasts an exceptionally varied natural backdrop, ranging from golden sandy beaches to jagged reefs. It is best viewed from the sea, because from a boat you can get a real sense of the beauty of the typically Mediterranean maquis and pine forest that surround the city. The Capo Caccia promontory, with its cliffs reminiscent of a sleeping giant, has become one of the symbols of Alghero, along with the prized red coral.

The Capo Caccia area, which faces out over Isola Piana and the Gulf of Porto Conte, is very interesting for its wealth of natural history, and accordingly, it plays host to the Capo Caccia/Isola Piana Marine Protected Area. The special karstic geology of this part of Sardinia makes it rich in caves and ravines, many of which remain unexplored. This area is the site of the famous Grottos of Neptune, which can be accessed by the sea or by land (via the famous 656 steps of the Escala del Cabirol). Once inside, Neptune’s Grottos afford a wonderful panorama of pools, including the so-called Giant’s Pool, as well as strangely shaped stalactites and stalagmites, such as the Organ.

On the eastern side of Capo Caccia, carved out of the cliff face, there are the Grotta dei Ricami and the Grotta Verde, where the remains of graffiti dating from the Paleolithic epoch are still visible. Those who like to go diving will be in their element here, with mile after mile of sheer chalky cliffs and a plethora of karstic caves. This, one of the Mediterranean’s most spectacular coastal environments, is awash with an incredible variety of marine flora and fauna. Just a few metres down, there are major colonies of red coral -symbol of the city of Alghero - alongside all manner of crustaceans, including lobsters and enormous lobster crabs, as well as moray eels and giant conger eels. For some time now, the sea around Alghero has also been populated by numerous types of dusky groupers.

The most famous site around these parts is the Grotta di Nereo, which is considered the largest marine cave in Europe, with a depth ranging from -30m to -6m. Keen amateur archaeologists will enjoy visiting the various attractions outside the city, such as the Anghelu Ruju Necropolis (where you can see the so-called Domus de Janas, "fairy houses" or "witch houses"). Other places of interest include the Roman villa of Santu Pedru at Santa Imbenia, the site of the Purissima (where the now-vanished town of Carbia is said to have stood) and the nuragic complexes at Palmavera and Santa Imbenia. In addition, there are other nuraghi (megalithic edifices) in various conditions throughout the area, and one noble tomb, the Tomba Aragonese.

A curious legend surrounds the Madonna di Valverde: it would appear that a Madonna was found by some fishermen, who brought it to the Cathedral, only for it to disappear the very next day; it was then re-discovered in the same place where it had originally been found, and since then the Madonna di Valverde has remained in the Sanctuary, where even today ex-voto offerings continue to be made. 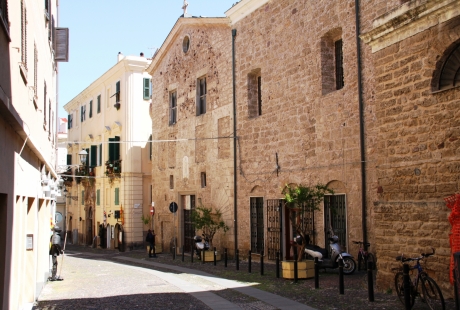 The old town: history, boutiques and movida within the walls of the ancient Spanish city

The history of the city of Alghero has in great part been all about colonisation. From the 17th century right up until the present day, the city has been populated by Catalans, who have left an indelible mark in terms of their customs. The historical centre, which is the heart of the city, has remained intact over the centuries, and is today a hotspot both for tourists and for cultural anthropologists.

It is possible to visit the centre on foot, in a carriage or on the celebrated Catalan train, which uses a virtual guide to recount the history of the city. In the ancient borgo, you can marvel at the craft workshops, the medieval palaces, the Curia and the Town Hall (Palazzo Civico), which are scattered amongst the stores and designer boutiques.

During the summer, the squares of the historical centre are brought to life by events and concerts, and are very much the hub of tourist activity in the evening. This part of town includes numerous pubs that are very popular with tourists, and nighthawks will never be short of nocturnal entertainment, thanks to the clubs that are situated towards the beach and on the periphery of the city. 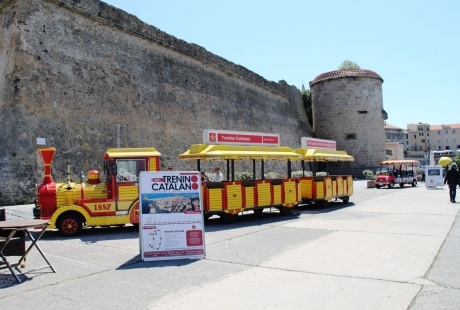 The option to rent a vehicle is important for those who want to move around but do not know the area well.

In Alghero, you will find numerous places offering the rental of cars, scooters and bicycles, with electric cars available to get you round the historical centre. Boats and dinghies can also be hired down at the port.

This website uses cookies, third-party cookies included, to improve your experience and provide you better solutions. By closing this banner, scrolling this page up or down or by clicking on any of the elements of the page, you accept the use of these cookies. You can find complete information click here
OK